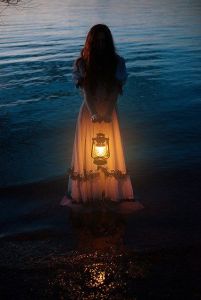 [Part 2 of a 3-part series on becoming a woman of strength and dignity.]
There was a garden. There was a beautiful young woman. There was a deceitful serpent. There was the promise of power and control.
She took the fruit, believed the lie, and with one bite, the world was forever changed.
The world was forever changed because one woman could not stop her craving for control.
And we’ve been fighting the battle ever since. The battle between being capable, intelligent women who have been given skills to lead – and also being created with a specific role that is not to dominate over men.
What to do with that in a culture that has been pushing for more than half a century for equal rights between men and women – and swinging the pendulum rather far away from the housewifely stereotype?
Good question … because I’m a woman who likes control way too much, and who also believes in leadership so much that she works at developing a leadership program for a national theater company.
I also believe in the beauty of men’s and women’s roles as God created them to be in Ephesians 5. Does that make me a hypocrite? I don’t believe so. I simply think that the world looks at these two arenas as opposites and can’t bear to think they might be able to co-exist – because heaven forbid a woman give up her rights a little bit!
That’s where the dignity of the Proverbs 31 woman comes in. The Proverbs 31 woman was by no means a weakling. She was up from dawn to dusk, managing a house, trading with the merchants, and providing for her family. She had to be strong, no question about it.
Her true dignity came from knowing she had power and strength, but also knowing that she shouldn’t always exercise it. Her strength was under control. Her dignity came from humbly accepting that she didn’t have the right to always make herself heard, but choosing when and where to graciously voice her concerns or thoughts.
She knew she needed strength to do her job, and she did so, in an unassuming way that didn’t feel the need to be flaunting it in everyone’s faces. She loved her husband so much that she desired to make him well-thought of and respected. She understood that his job was to lead, hers was to support and submit, and when both jobs were done well, peace and harmony existed.
It’s funny because I don’t necessarily disagree with everything the “world” says about strong women. In my research, I came across an article titled, “12 Things to Expect When Dating a Strong Woman,” and I went into it, expecting to criticize everything it said. But then … the more I read it, the more I realized the woman sounded a lot like me!
Not everything the article said was spot-on, but some points it made were not bad – it talked about how a strong woman lives her life with purpose, vision, and goals – how she’s incredibly loyal and trustworthy – and how she wants to build a beautiful life. I’d say those are definitely worthy things to strive after.
We just have to know how to pursue those things in a way that brings glory to God – and doesn’t try to usurp the role of the men in our lives.
As believers, we all have to submit to someone – and we always chafe at the thought, because we like to be independent people who make our own decisions. But God says, “No, that’s not the way I work.” Ultimately we all have to learn to submit to God’s authority, and as women, we have to learn to submit our longings for control so that we can carry out the beautiful partnership that God has in mind for men and women.
Titus 2:4-5 says, “Then they [the older women] can train the younger women to love their husbands and children, to be self-controlled and pure, to be busy at home, to be kind, and to be subject to their husbands, so that no one will malign the word of God.”
How can we best exercise our strength as women? By developing our character, investing in others’ lives, devoting ourselves to the tasks God has given us to do, controlling our passions, and ultimately submitting to God’s will.
Is it supposed to be easy? No, of course not. We have this pesky little thing called our sin nature that rebels at the idea of being told not to exercise our strength sometimes.
But the most dignified of people are not the ones loudly pushing their agendas all the time. They are the ones with a gleam in their eye that speaks of hidden reservoirs of strength – strength under control. They don’t need to flash it in everyone’s face, because their strength and confidence comes from the ultimate Strength – God Himself.
Eve made a grave mistake when she tried to take control into her own hands instead of trusting her Father and submitting her desires to Him. However we don’t have to follow in her footsteps. We can step away from the neon-lit path of womanly domination, and follow the path lit by glimmering lanterns – trod by women of dignity.
For there’s nothing more beautiful in a woman than a heart submitted to God, a role embraced with grace, and a strength demonstrated in quiet ways.
She will be a woman worth remembering.