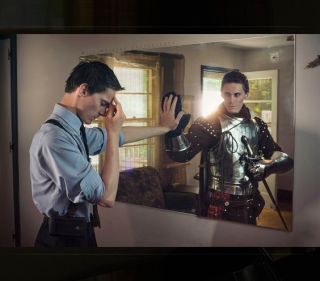 Do you know what my favorite love stories are about?
They’re about a man … who never stopped loving her. Who pursued her, gently but insistently. Who never stopped believing that she was the only one for him, and though his passion may have been reserved and not wildly flaunted, it burned with quiet intensity until he made her his bride.
They’re about Westley and Buttercup from The Princess Bride.
They’re about Jake and Melanie from Sweet Home Alabama.
They’re about Gilbert and Anne from Anne of Green Gables.
They’re about Mr. Knightley and Emma from Emma.
They’re about Sir Percy and Marguerite from The Scarlet Pimpernel.
Five vastly different stories – five vastly different ways that he pursued her. But in all of them runs the theme of a man who loved a woman, even when she appeared to not love him back. He just never gave up. And I think that in the end it’s what opened the ladies’ eyes to the fact that these were the only men for them – because the men were so ardently committed to them.
A love like that – pursuing even in the face of apparent disregard – you know that’s a love that will last a lifetime. It has forever written all over it. It’s the kind of love that’s in it no matter what – because that man is dedicated to wooing and protecting his lady for the rest of his life.
I hear the objections in my head already. “It’s the 21st century, Lydia. Why does the guy still have to be the one to pursue the girl? Isn’t that sexist? Shouldn’t they each be allowed to initiate?”
Yes, I will admit. I’m old-fashioned. And I like it that way. Because there is something in my womanly soul that wants to be protected – that wants to be looked out for – that wants to be desired and felt worthy enough to be pursued.
Not chased like an animal in a hunt. Not annoyingly pestered even after I’ve made my decline. Not viewed as a city to be conquered.
But nurtured like a flower needing sunshine and rain in order to fully bloom. Waited for like the most priceless treasure someone could ever receive. Respected as one of God’s precious creations. Loved in a sacrificial way that says, “I will do what is necessary to prove my love.”
Sometimes women can be stupid. I think Buttercup, Melanie, Anne, Emma, and Marguerite all had instances of stupidity where they didn’t see the greatest treasure on earth right in front of them. They needed a little pursuing, a little waiting, a little demonstration to take the blinders off their eyes to reveal what they really needed. But the moment they did see it, the love story clicked into place and everything made sense – including everything they wanted in the man who had never left their side.
That’s the kind of man we might rightly call a gentleman – maybe a bit of a hero. Because aren’t heroes the ones laying down their rights in sacrifice for those they love? Aren’t they the ones quietly doing the work no one sees? Aren’t they the ones feeling the depths of emotion for what they’re committed to and sticking it out when it’s the hardest?
And don’t they deserve the greatest reward? The reward of the love of the woman they’d do anything for?
You might also ask, “Why in the world is that your favorite kind of love story? Aren’t all the others just as beautiful?”
They are. But this kind of love story – I believe it’s an echo of the greatest love story of all time – the way Christ pursues us. We were far more than a lady who needed some gentle persuading. We were rebels against God, loving ourselves and being slaves to our sin – and yet He never gave up on us. He sacrificed everything to woo us and bring us to Him. He was the ultimate hero – the one who deserves all the praise.
When men pursue their ladies, they are in essence imitating the picture of Christ pursuing us – what we most long for more than anything else. When we see that pursuing expressed in real life or the stories we read, our hearts are drawn to it because it’s an echo of heaven – a shadow of the greater reality.
You might think I’m the sappiest romantic to ever write a blog post, but I’m telling you – it’s only because the Author of Romance has won my heart, and He reveals its beauty to me more every day. It’s why I love going to weddings, hearing the “how we met” stories, and cheering for 50+ year anniversaries of elderly couples.
Because every celebration of love is a celebration of God Himself – the Lover who never stops chasing our hearts.
The way He pursues His bride, the church, will be the theme of eternity. So let’s rejoice in the little earthly tastes we get here on earth when a man risks it all to pursue the lady of his dreams. That’s worth celebrating.

One thought on “The Way He Pursued Her”