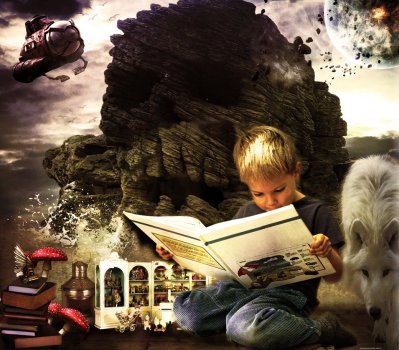 30-Day Writing Challenge
Day 25: Think of any word. Search it on Google Images. Write something inspired by the 11th image.
(I admit: it’s not the 11th image. But that’s because this picture, discovered upon the search of the word “imagination” was so much more inspiring than the 11th image. My apologies.)
When I was a child, no one had to tell me to use my imagination. I do believe I rather over-used it as I sometimes believed that what I imagined was practically real. My make-believe worlds, fueled by the books that I read and the stories bubbling within me, were constructed through my Barbie dolls, my dollhouse dolls, my baby dolls, and the giant backyard behind our house.
I would write down stories, I would create families, and then I would go act it all out, perfectly content to amuse myself for hours. In fact, sometimes I preferred playing by myself because then the story could go exactly the way I wanted it to without interference from my friends.
Now as I teach fifth-graders, I am sometimes alarmed when they say, “I just can’t think of anything.” Or when they take things too literally and can’t imagine anything beyond the face value of what we’re reading or talking about. Or when the descriptions in their stories are standard and basic.
I worry that they are part of a generation that has had everything imaginative handed to them through movies, video games, and computer screens. I worry that they haven’t read enough books so they don’t know the delights of imagining the world in the pages, and then carrying that over into worlds that they then create on paper.
I remember in my reading classes in college we would discuss comprehension strategies, one of which was visualizing. “Now why would we need to teach such a basic skill?” I wondered incredulously. “Everyone does that automatically!”
Apparently not.
When you constantly have images handed to you on a flickering TV screen, you don’t have the innate ability to create your own images when reading written words on paper. Your imagination suffers from a lack of use – it only imagines what it’s already seen, not what is described in a book.
And so – we do need to teach our children not just that it’s important to use their imagination, but also how to use their imagination. We need to encourage them to take risks, ask questions, and picture vividly the details on their own.
Because as I learned when teaching 6th-grade science last year, they are too used to having the answers given to them. Why ask questions, they wonder. I don’t want to be wrong. I can look it up on Google. I can always have the answer.
But when we teach them to use their imaginations, we are giving them the key that will help them unlock future mysteries. We are teaching them to say, “What if?”
“What if there was a medical cure for that?”
“What if we pushed our limitations a little further – what could we do then?”
“What if there was a story about something fantastical and mysterious?”
“What if there was a way to reduce hate and promote education in poverty-stricken areas?”
“What if … ?”
When children learn to use their imaginations, they learn to think outside the box. They learn that it’s okay to be creative and yes, maybe even a little weird at times. They learn the joy of exploration and discovery. They find whimsy and delight. They find comfort in other worlds written of in dozens of stories. They are pushed to wonder about new things and hunger after new knowledge.
Imagination isn’t just for the 5-year olds in the sandbox. It is for them.
But it’s also for the 10-year olds learning about the American Revolution. It’s for the 14-year olds discovering Scout and Atticus for the first time. It’s for the 18-year olds who are doing biology research and considering a career in the medical field. It’s for the mamas who teach their little ones to dream, and it’s for the daddies who walk forward in dreams they’ve had since they were small.
Imagination gives hope to the world and delight in its everyday beauty.
We cannot afford to skip that part of a child’s education for if we do, we will be skipping that which makes education delightful.
And if education ceases to be delightful and passion-provoking, our future society will be joyless and stunted.
Invest in the imagination. And watch how the children will thrive.