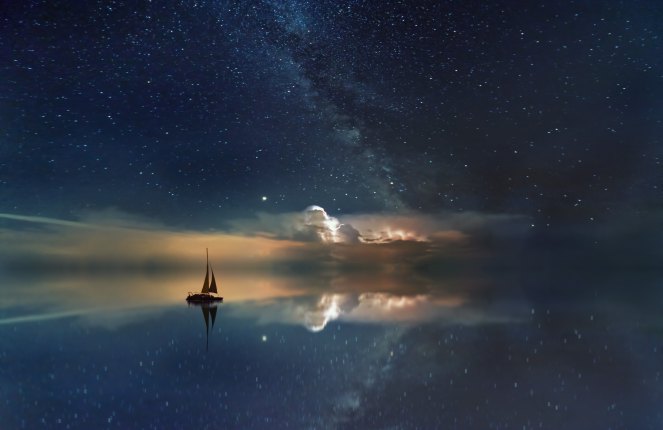 If you know me, you know that I have vivid dreams (the night-time kind, although I suppose I also have vivid day-time dreams, too). I have forced my roommates, family members, and students many times over to hear the ridiculous stories of my far-fetched dreams, laughing over the way things get twisted up in my subconscious mind.

But not all of them are exactly far-fetched. And sometimes when I wake up and think about what I just dreamed, I’m struck by the meaning in them.

Let me just clarify something before we go any further: I don’t believe that God speaks to me in dreams, like He did with specific characters in the Bible. I’m not a Joseph, receiving prophesies about the future. I believe that God speaks directly to us through His Word, and that is what I will stake my decisions and my trust on.

And my desire to be careful about this has often led me to think that dreams don’t mean anything. But even though I don’t believe in God’s direct voice through my dreams, I do think He can reveal things to us in our sleeping mind that we haven’t gotten in our waking mind.

Like the dream I had about a boy in high school who had a giant crush on me to whom I was rather unkind. And years later, in a dream, he came to the door to go to a school event with me, and when I opened the door, I saw the most incredible sadness in his eyes that I’d ever seen. When I woke up, I was convicted about the flippant way I had treated him and how I’d never considered how he actually felt. And I don’t think I would have grasped that were it not for the dream.

Granted, many of my dreams are extensions of my current worries – I can’t tell you how many times I’ve dreamed my classroom isn’t ready for the first day of school or that I’m at a conference and I don’t have anything ready for the workshops.

And let’s not even count how many dreams I’ve had about my house getting broken into (although the one where I sat the burglar down to have a talk about his poor choices still makes me laugh).

I’ve also dreamed several times that I’m getting married to someone I don’t know very well – once, it was to someone I’d only talked to on the phone and had never met in real life.

I dream about almost everyone I know, so I’m sure you’ve made an appearance in my dreams if we’re friends at all. I also have people show up in my dreams that I haven’t seen in years because I scrolled past one of their posts on Facebook.

Many nights I wake up and don’t remember what I dreamed about – or I remember vague pieces of it or the way it made me feel. The worst is waking up feeling sad because of a dream and not knowing why.

But the ones that are most intriguing to me are the ones filled with symbolism, reminders, and new ideas – that are so vivid I feel like I actually experienced them – and when I wake up, I remember every single detail of what happened. And you can call me crazy – but I do think there’s a purpose for all of them.

I’ll share three of them, and you can agree or disagree – but there’s no doubt they were powerful because of the way they still linger in my mind.

The first one, I believe, is an example of God’s reminders that come when I most need them. The day before I had had a conversation with a guy I had just met, which filled me with awkwardness and anxiety. This then fueled my fear of never overcoming that and therefore never being able to get married.

And then I dreamed that night that I was rehearsing for a show, and I was doing a partner dance with one of my guy friends who has always been like a brother to me. I remember the joy of dancing with him and how incredibly safe I felt in his strong arms. When I woke up, I thought, That was strange. Why did I dream about him? I’ve never liked him as more than a friend.

Then I remembered how anxious I had been the day before, and how this friend was a calming presence in my dream, even though there was nothing romantic about it. And I knew that it was a reminder from God that I have “safe” people in my life – and that if I ever do end up getting married, it will be to someone who doesn’t make me feel anxious, like this friend.

The second dream was rich with symbolism and it took me some time to figure it all out after I woke up. It was New Year’s Eve in the dream, and I was about to count down to midnight with my nephew and other family members. But then suddenly I was transported away from them, and I was flying, using some kind of hang glider-type wings. I remember the thrill that came from soaring above buildings and trees through the dark night air.

Finally, I landed on a hilltop that overlooked some city, and I looked at the time on my phone and thought, Oh no, it’s almost midnight, and I’m not with my family to count down! But I couldn’t do anything about it, and all the fireworks started going off, so I just enjoyed them by myself on this hilltop.

When it was over, I started trying to figure out how to get home in the dark – walked past some country houses, found the street names, and was so glad I had my phone so I could use the GPS. But then – oddly enough – I realized I had to get in this chute-like slide to get home, so I crawled in and started sliding down. After a while, I came to a place where there multiple chutes to choose from that got much smaller – and I remember this great sense of feeling alone and just wanting to get home to be with my family.

So what did it all mean? I feel like the flying part was exactly how I feel when I’ve accomplished something big – like written something important or spoken at an event or led part of a conference. There’s a sense of euphoria, just like when I was going over trees and buildings, until I’ve “landed” so to speak back in reality. But when I landed, I was all alone, just like I often feel after I’ve done something big like that, and I have to figure out how to “get back” to my friends and family. And all the winding chutes are the vast possibilities of getting there – or even just where to go next after that accomplishment. There’s probably more to be mined from that one, but it was a fascinating revelation to me about success and how it can sometimes be euphoric, but also incredibly lonely at the same time.

The last dream was just a bit of inspiration, probably stemming from the book I’m currently reading, but beautiful nonetheless. I won’t bore you with all the fine details – aside from the fact that there seemed to be people from all my theater experiences in life together at one time which was pretty cool. But there was a girl singing a solo with her guitar – and this was when my alarm went off, interrupting it – and these were the words of the chorus that she was singing:

“So darling, don’t be afraid – Broken is the beautiful new brave.”

The words kept ringing in my head after I woke up, and I knew that they were exactly what I needed to hear – and I scrambled to write them down so I wouldn’t forget them. It was a gift of poetry, given to my sleeping mind, and it was exquisite to receive.

There are dozens of other dreams that I’ve had and have no clue what they mean – the Indian baby named Amira – the guy lying in the street who got up and started yelling at us (which actually happened the next day), the one with the elaborate movie-like plot that I might yet turn into an actual story.

But the ones that come and are filled with description, new ideas, and thought-provoking messages are the ones I still mull over to this day. I wouldn’t say they all mean something – and I’m not the type to try to find strange meanings in small details. But I do think the role of dreams in our lives can sometimes be greater than we might think. You might disagree with me, and that’s okay (especially if you never remember your dreams), but I do think it’s fascinating to discuss and hear other people’s ideas on this topic.

So please share your thoughts with me – and if you ever get tired of hearing my dreams, just tell me to keep them to myself! I promise I won’t get offended. I’ll just get excited to go to sleep and experience something new in my dreams.

Photo by Johannes Plenio on Unsplash.