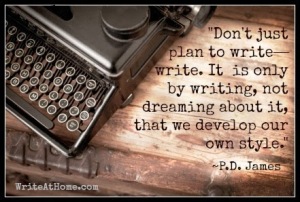 I need creativity in my life. I need it even when my schedule is bursting fat with to-do’s and appointments … I need it when stress is oozing out of my pores … I need it when my head aches with exhaustion and I can’t think straight because of all I’ve crammed into my brain.
In fact … I need it even more at these times.
Creativity unwinds the tightly wound wires of my life. It loosens the bottle-neck of crazy and reminds me of who I really am at the core of my soul. Creativity – even when I have to tug it out with the last little amount of energy I have in a day – is God’s reminder to me that I get to be a part of making something beautiful in the world. And it doesn’t have to be perfect.
No matter how many rules and standards I have to follow when filling out lesson plans and no matter how many rubrics they will judge me against – there are no rules to creativity. Except to just start. Which, of course, has always been my biggest downfall. I don’t start writing because I fear failure before I begin. Or I’m afraid nothing will come when I stare at the blank page. But one thing I’ve learned in my writing practice in the last year and a half is that once you begin – there’s no telling where you might end up. And with each subsequent entry into my writing practice journal, I refine my art just a wee bit more. That doesn’t mean it’s publisher-worthy every single time. But if I commit to practicing writing, every now and again, a gem worth remembering shows up. And those gems should be motivation enough to keep going.
So here I go into the month of March – at the end of which, I begin student teaching. If ever I needed to hang on to my creativity to keep me sane, it’s now! But probably more than anything, I just need to teach myself discipline. So I chose to start now. And to keep me even more accountable, I’m going to publish these everyday writing practices for a whole month … during that time of year we so alluringly refer to as “The Ides of March.” Hence the name of the series.
Perhaps, in reality, no one will read these random, unrelated series of postings but me … I’m certainly not going to be posting them on Facebook everyday to nag the world to read them. But more important than having them read is simply me committing to writing and having a place to store those writings – a visible place to keep track of my goal. And yes, I’ll post a link every now and again, and if you feel so inclined to follow along on this journey of exploring my writer’s bent, I gladly invite you. You might even give me feedback if you’re a fellow writer-soul.
Here’s to new discoveries, a new challenge, and the promise of creativity blossoming under discipline’s diligent hand in the month to come!
Also, some prompts to keep me on track … (some taken from the book A Writer’s Book of Days*, some sprung from my own imagination):
March 1st – Pick a picture from Pinterest & use it as inspiration
March 2nd – Write about the blues in the night*
March 3rd – What this day was like five years ago
March 4th – A lie someone told you*
March 5th – What can be seen through the fog*
March 6th – “The woman in the window” (after Roger Aplon)*
March 7th – Attending a ceremony*
March 8th – At the end of an empty street*
March 9th – The face of tomorrow*
March 10th – A character sketch based off someone you know in real life
March 11th – What people don’t understand
March 12th – The best “small moment” of the day
March 13th – Write about your father’s eyes*
March 14th – Find a previously unpublished piece of writing, revise, and post
March 15th – This is how lonesome feels*
March 16th – Write about sinking*
March 17th – Use the first post you see on Facebook as inspiration
March 18th – When Mother waits
March 19th – On the eve of the wedding*
March 20th – Write about a family meal*
March 21st – A list of sounds from the day
March 22nd – The saxophone sound of midnight*
March 23rd – A scene from your story
March 24th – Write about an ending*
March 25th – “First time I saw her …”*
March 26th – Someone’s playing the piano*
March 27th – Look up the word of the day. Let it inspire you.
March 28th – Write the horizon at dusk*
March 29th – The person who inspired you most today
March 30th – In the backseat*
March 31st – The antidote to pain*